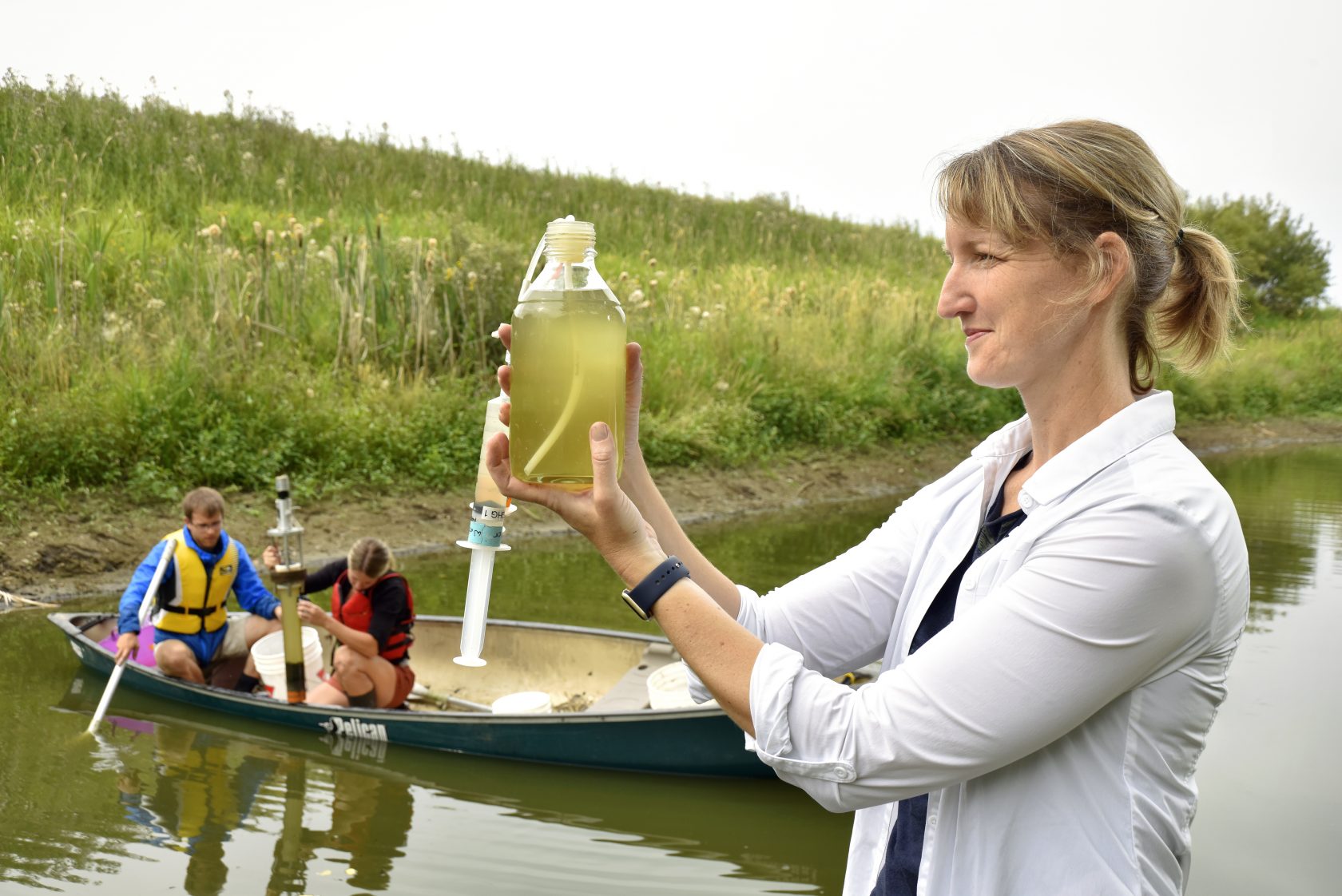 University of Regina researchers receive funding for their research projects from a variety of different sources, including federal and provincial governments, industry, and community organizations. This funding drives the University’s thriving research community and helps our scholars to push the boundaries of discovery and find solutions to some of the world’s toughest problems.

Here are a few of the research projects that have been awarded support over the last few months:

From better understanding mitochondria – those tiny powerhouses providing energy to our cells – to further exploring neutrinos (subatomic particles that, while abundant, are difficult to detect), two University of Regina researchers were awarded $2.8 million to delve into these areas of untold possibilities. 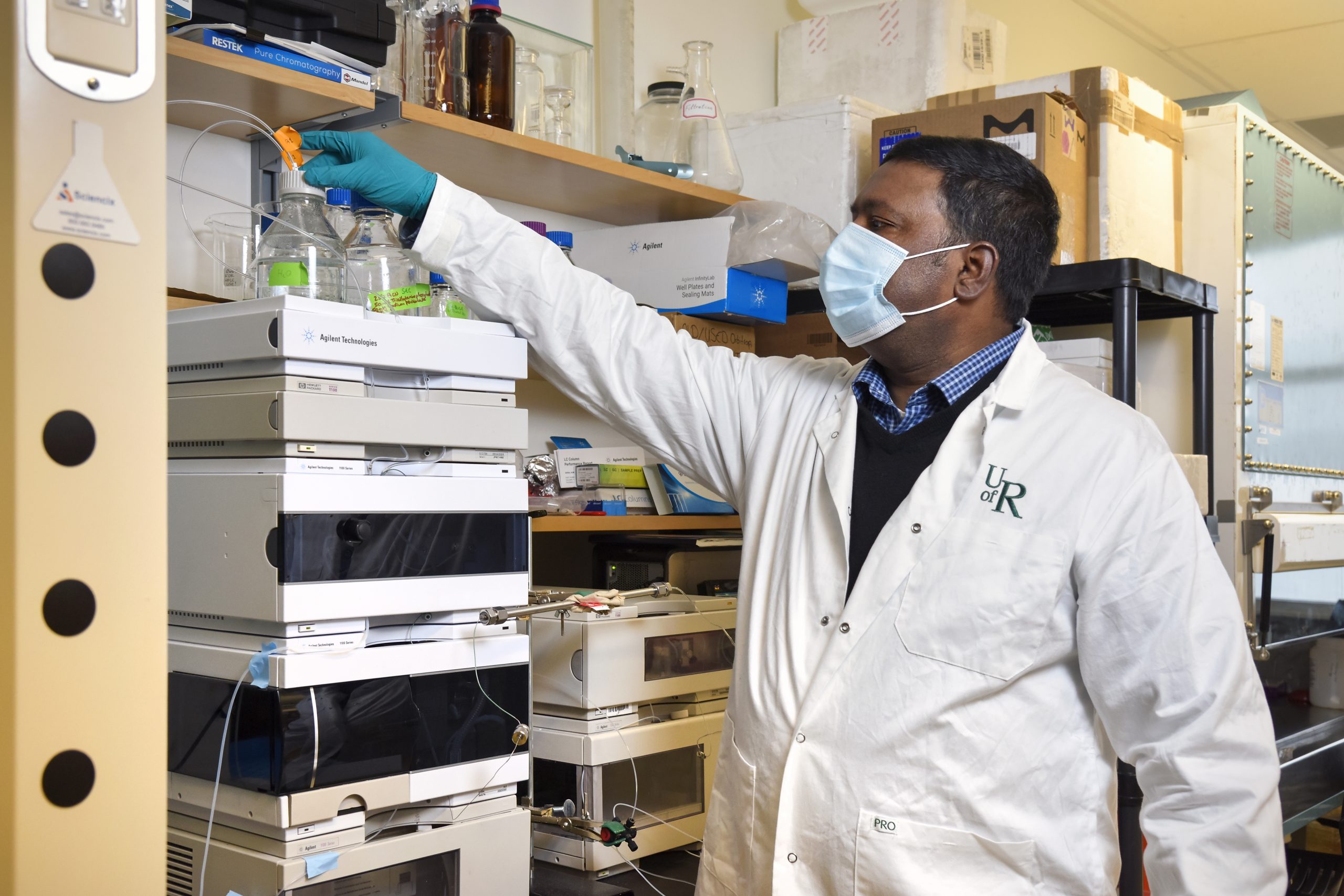 Biochemist Dr. Mohan Babu in his University of Regina lab processing samples in the high performance liquid chromatography (HPLC) machine. HPLC is a technique in analytical chemistry used to separate, identify, and quantify each component in a liquid mixture. (Photo by Trevor Hopkin)

“Mitochondria exist in our cells, helping to turn the energy we get from food into energy that the cell can use,” says Babu. “When mitochondria aren’t functioning correctly, they wreak havoc on our bodies. Mitochondrial dysfunction is in the spotlight for being a key factor in a range of chronic diseases, including psychiatric disorders like bipolar disorder, neurological disorders like multiple sclerosis, and metabolic disorders like obesity-linked, non-alcoholic, fatty liver disease, which together cost the health-care system billions of dollars each year. Current therapies relieve some disease symptoms, but their underlying molecular attributes remain unclear.”

Additionally, Babu says, researchers commonly observe that when pregnant women are exposed to environmental pollutants, their mitochondrial function is altered, leading to chronic disorders that can cause poor birth outcomes and chronic issues.

“This CFI funding will help us find answers by supporting the creation of the Mitochondrial Systems (mitoSYSTEMS) Research Centre at the U of R,” says Babu. “This unique facility on the Prairies will house 10 prominent researchers and clinicians tasked with uncovering the role of mitochondria in chronic diseases. We will then use this data to collaborate with pharmaceutical companies to create drugs and clinical trials for those with chronic diseases in Canada.”

Babu says his research project will complement current efforts at developing new technologies, and, with CFI’s contribution, will relieve some of the pressure on Canada’s health-care system.

While Babu is focused on human health and medical advancement, Dr. Mauricio Barbi is concentrating on the building blocks of galaxies, stars, planets, and even humans in the universe. 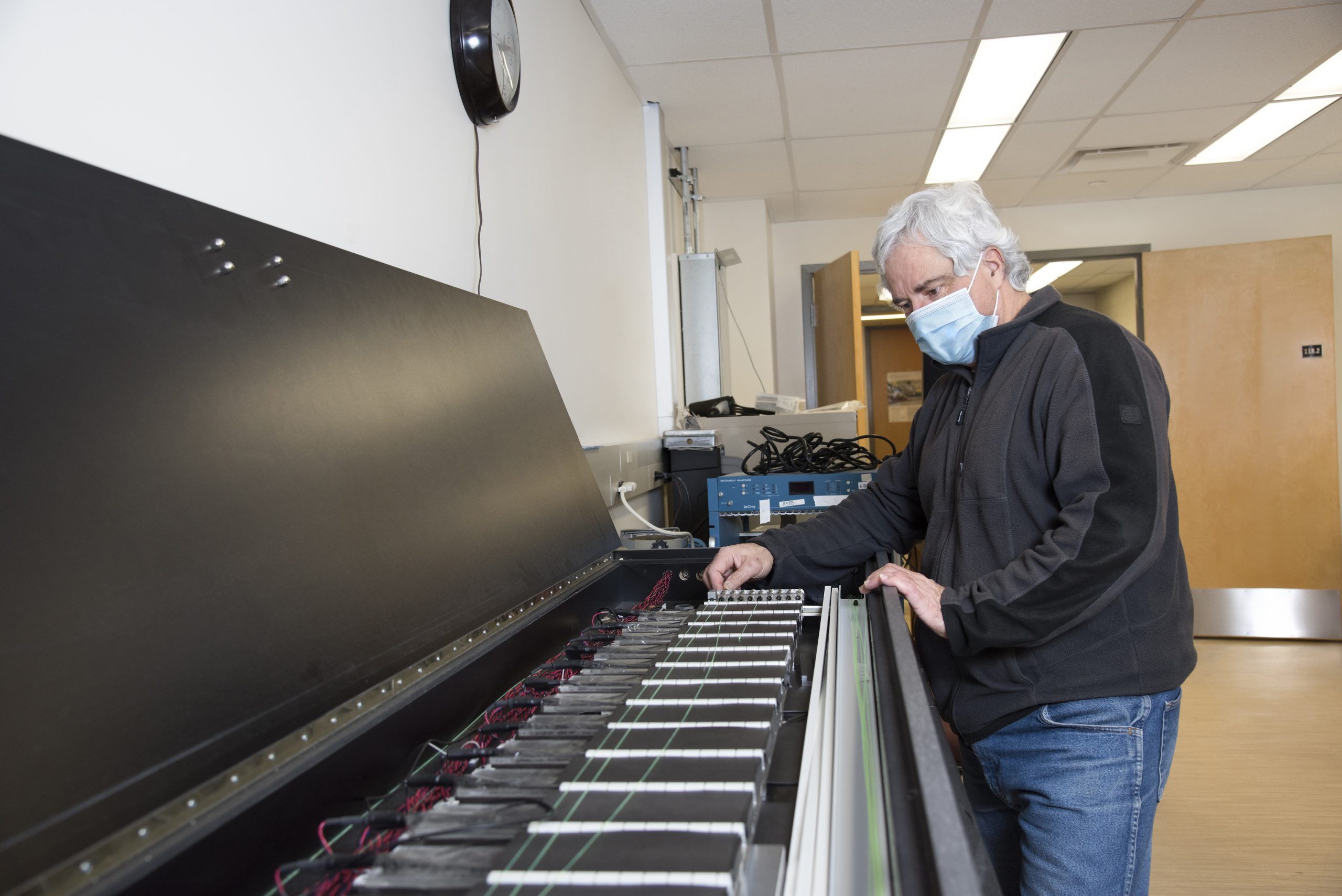 Physicist Dr. Mauricio Barbi in his U of R research and development lab where he and his team are developing components for the Hyper-K project. (Photo by Rae Graham)

“This CFI funding will allow an international team of researchers to continue working on detecting elementary particles through the Hyper-Kamiokande project,” says Barbi, who is part of the effort that consists of 84 institutes in 17 countries.

The Hyper-Kamiokande detector – called the Hyper-K – acts like both a microscope and telescope and, using neutrinos, is used to observe elementary particles, the sun, and supernovas.

Barbi, a U of R physicist who is a member of the International Board of the Hyper-K collaboration, is part of a team of researchers that has received significant funding through CFI’s Innovation Fund. In total, the University of Victoria received $5.4 million to lead the Hyper-K project, $1.4 million of which has gone to Barbi and his team at the U of R.

Neutrinos, which are both fundamental and abundant in the universe, are also incredibly difficult to detect, and, thus, are not well understood.

“...we can begin to extract the exact properties of the neutrinos – which literally opens up the universe to us.”

“Our international team wants to understand how the asymmetry between the production of matter and anti-matter allowed for the existence of galaxies, stars, planets, and even ourselves in the universe,” says Barbi.  "Hyper-K will use state-of-the-art, highly-advanced technology to collect data from the interaction of neutrino particles and the detector.”

Among other components, Canada’s scientists are responsible for the photosensor system in the Intermediate Water Cherenkov Detector (IWCD) of the Hyper-K experiment.

“The IWCD is a water tank that’s eight metres tall with a 10-metre diameter and instrumented with a suite of electronics components to measure the neutrinos,” says Barbi. “These neutrinos can, when interacting with the oxygen in the water, produce other sub-atomic particles that can travel faster than the speed of light and create cones of light in the Water Cherenkov Detector.”

The light produced in these cones is then collected with the photosensor system.

“Because each particle produces a cone of light that has specific characteristics, once reconstructed, we can identify the exact particles and the type of neutrino that interacted with the oxygen. From there, we can begin to extract the exact properties of the neutrinos – which literally opens up the universe to us.”

Barbi says the neutrinos are used to better understand supernova explosions, the mechanisms acting in our sun, and the existence of all the structures observed in the universe.

Under his leadership, Barbi’s team is responsible for ensuring that some of the complex components developed in Canada for the Water Cherenkov Detector meet the specifications required to ensure the detector will operate optimally.

“We are also responsible for developing a component known as the scintillator detector, which helps to verify that what we detect are actually neutrinos and not some other type of particle.”

The CFI’s Innovation Fund invests in research infrastructure and technology development at every stage.

Three University of Regina researchers were awarded close to $600,000 from Saskatchewan’s ADF for their livestock and forage-related research projects.

Sulfate concentrations in agricultural dugouts and ponds are currently one of the largest threats to water quality for cattle health on the Prairies. The result of several interacting regional and local factors, sulfur is found in soil, rocks, and groundwater across landscapes, meaning it can easily find its way into water systems.

While examining 100 dugouts across Saskatchewan over three years, Finlay found high sulfate concentrations causing poor water quality on 25 per cent of the sites surveyed, with nearly 10 per cent of the dugouts she studied unsuitable for use by livestock. 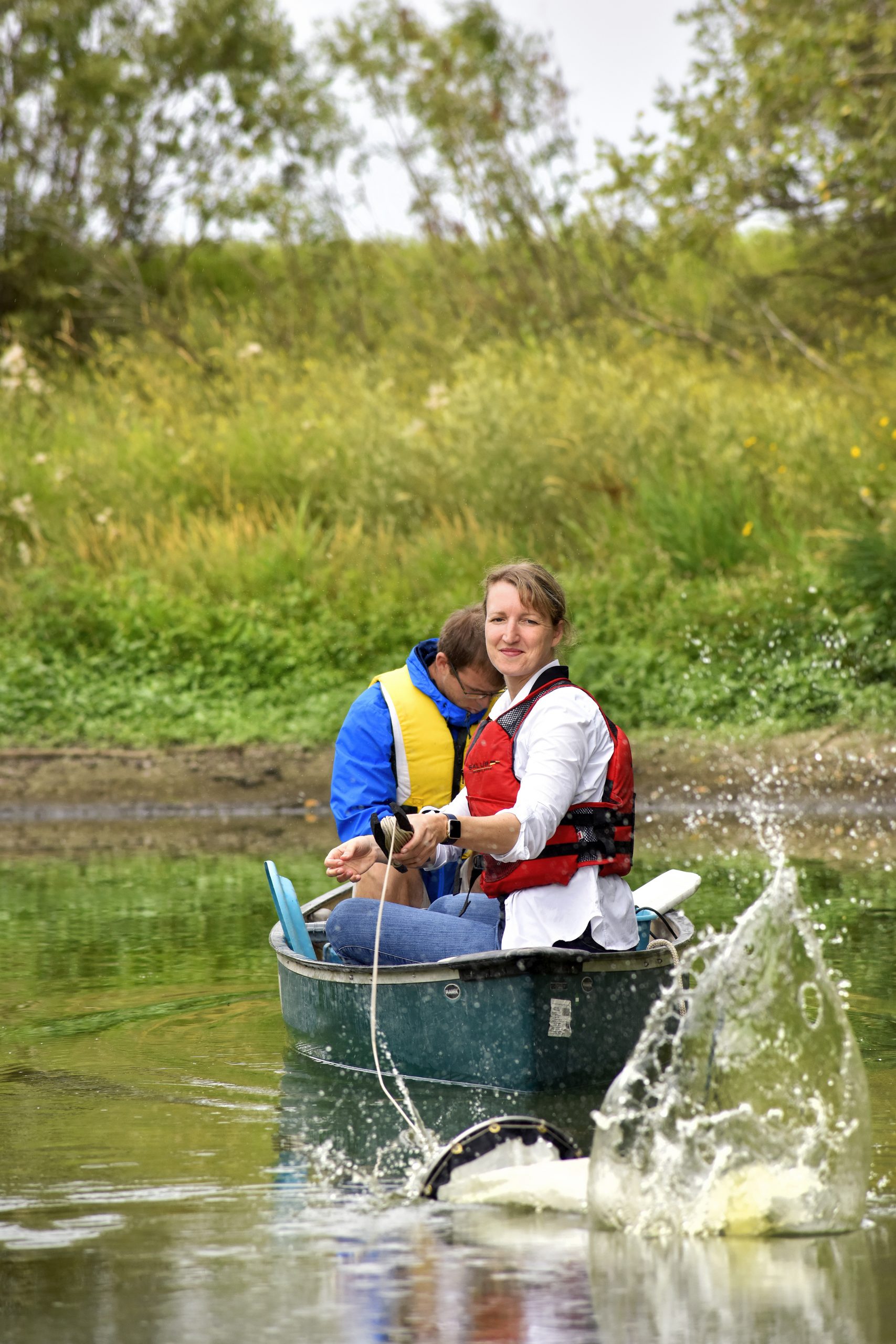 Finlay’s research will address the water-quality issues by identifying the sulfate concentration levels in water sources that cattle access on farmland and then find ways to improve the water quality.

“As climate changes and human activities alter the movement of water across the Prairie landscape, it is imperative that we predict, prevent, and mitigate negative impacts on water quality,” says Finlay. “We hope that this research will provide tangible solutions to an increasingly problematic water-quality issue for cattle farmers.”

Dr. Wu Peng, assistant professor in the Faculty of Engineering and Applied Science, received $149,000 for his project The Application of Artificial Intelligence in Agricultural Land Flooding Prediction in Southern Saskatchewan. Wu’s research will address the current need to better understand the interaction among agricultural activities, climate change, and flooding in the Prairies.

The main reason for land depletion in the Prairies, and the associated soil fertility loss, is that surface sediments are eroding due to flooding. Agriculture areas located in flood plains could face greater exposure to flooding in the future due to climate change. Through this research project, Wu aims to address the urgent need to understand the implications of changes in flood risk for agricultural land so as to better support sustainable flood-risk management.

Dr. Denise Stilling, associate professor in the Faculty of Engineering and Applied Science, received $150,000 for her project Discoveries in Extrusion Pulping Agricultural Crop Residue into Compostable Products. Stilling’s research will help to address the negative environmental impact of single-use plastics.

Each year, approximately 91 per cent of Saskatchewan farmland produces crops and, correspondingly, crop residue. Typically, this residue is regarded as waste. However, the straw is an annual, renewable, and relatively compostable fibre source. Crop residue from cereal and flax straw has proven to be ideal for single-use packaging products, and can also be used to produce compostable dinnerware. Stilling’s research will look at using the crop residue to potentially manufacture decomposable drinking straws, stir sticks, container sleeves, and medical devices like temporary drainage stents.

The Agriculture Development Fund was created to fund research that supports the success of farmers and ranchers.

A studio without walls

This art-based research project is delivered to older adults over the phone helping to combat the social isolation of COVID-19.