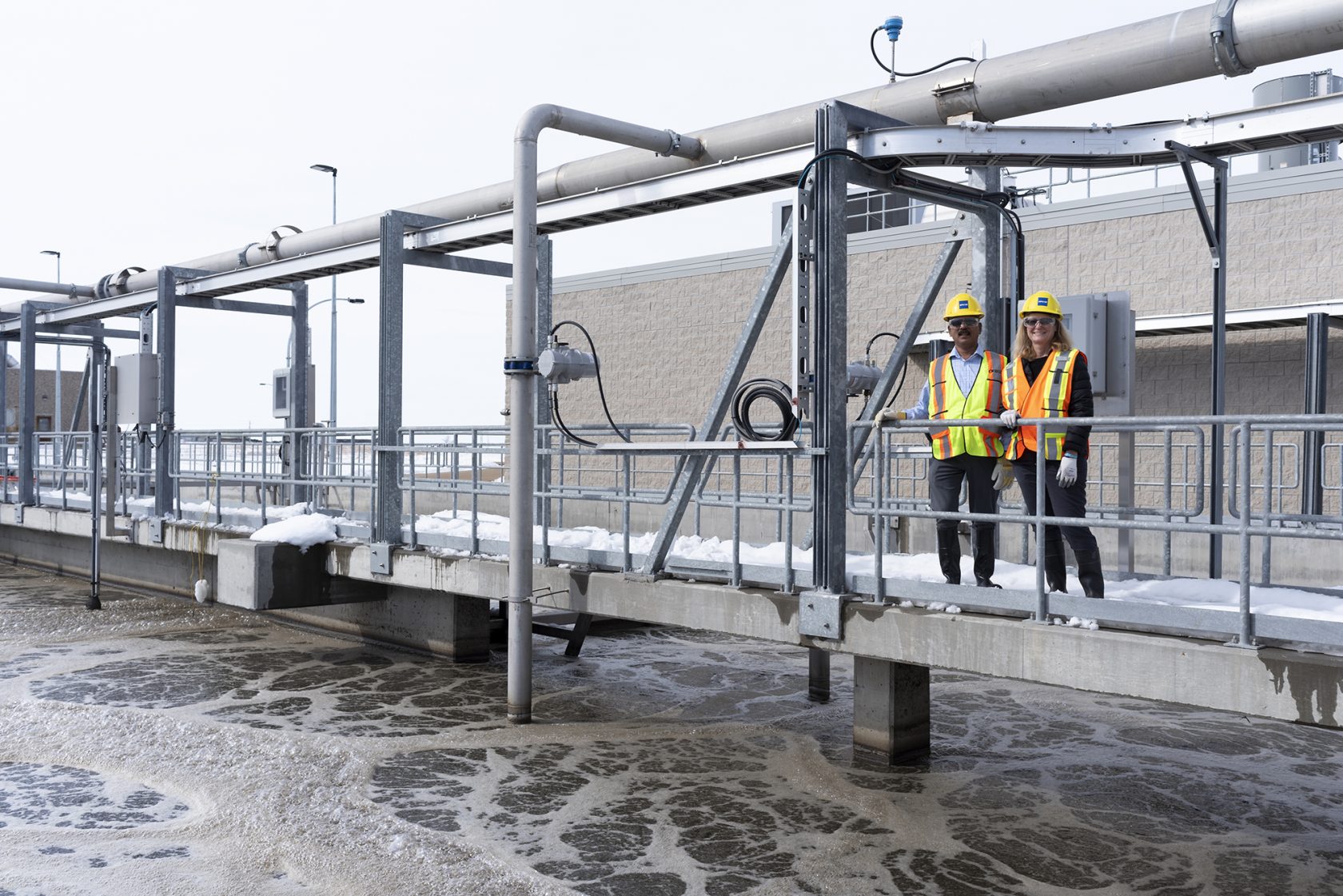 Working together to protect the quality of our water

Renata Raina-Fulton and Ondiveerapan (Arasu) Thirunavukkarasu stand at the bioreactors at the City of Regina Wastewater Treatment Plant operated by EPCOR. (Photo by Michael Bell)

Safe water is vital to human health, and that’s why a long-term collaboration between a University of Regina scientist and Saskatchewan’s Water Security Agency (WSA) is important to the province.

Renata Raina-Fulton, an analytical chemist in the Department of Chemistry and Biochemistry, and Ondiveerapan (Arasu) Thirunavukkarasu, a senior standards engineer in the Environmental and Municipal Management Services Division of the WSA, have teamed up to help protect public health and prevent disease.

Raina-Fulton says that her team at the University develops analytical methods for difficult-to-analyze contaminants, which often occur in real-life environmental samples.

“The analysis may be time sensitive or impacted by other materials in the sample, so we need to closely coordinate with the WSA on their sample collection and our chemical analysis,” says Raina-Fulton. “They provide us with real-life water samples that are often complex, allowing us to test the analytical methods we develop so that we can say with confidence whether or not the contaminants are truly in the environment or water treatment processes. It’s a very valuable collaboration.”

It’s also one that’s been developing for more than a decade.

“In 2008, we worked together to determine the exposure levels of haloacetic acids in the treated water of several water treatment systems in the province,” says Raina-Fulton, who explains that haloacetic acids are the undesirable by-products from the chlorination of drinking water.

Sludge sample in the lab at the City of Regina Wastewater Treatment Plant operated by EPCOR.

“Knowing the haloacetic acid levels, along with other aspects, such as treatment efficiency, cost, and stakeholder feedback, helped us to establish a new drinking water standard of 0.08 mg/L for haloacetic acids in the province,” says Thirunavukkarasu.

Then, in 2014, the research team investigated different toxins in water and wastewater, including the levels of pharmaceuticals, personal care products (PPCPs), and endocrine-disrupting compounds (EDC).

“Ultimately, the work we are doing together helps to reduce and prevent risks to the health of people and the environment.”

“This study helped to determine the concentrations of both PPCPs and EDC in water and will be useful for the WSA as we establish objectives and guidelines for some parameters in the future,” says Thirunavukkarasu.

“Delving into that work inspired my graduate student Ghada Aborkhees to develop a new-and-improved analytical method for studying compounds that are prone to degradation, such as Bisphenol A (BPA) and estrogens in wastewater,” says Raina-Fulton. BPA is a chemical formed from the breakdown of plastic ingredients, and is often found in containers such as water bottles and canned food products, while estrogen, commonly called female sex hormones, can be found in substances such as oral contraceptives.

Now, Thirunavukkarasu and Raina-Fulton are embarking on a new project that will focus on determining the levels of perfluorooctanoic acid (PFOA) and perfluorooctanesulfonic acid (PFOS) in water, two problematic chemicals that are resistant to typical environmental degradation.

“The results of these latest studies will be useful in determining exposure levels, treatment efficiency, cost estimates for treatment, and the adoption of improved drinking water standards in the province,” says Thirunavukkarasu. “Ultimately, the work we are doing together helps to reduce and prevent risks to the health of people and the environment.”

The experience of women living on Prairie farms in the 1930s came alive for undergraduate history student Brandi Adams when she delved into the archives of The Western Producer, a farm weekly that’s been an important source of news for farm families for almost 100 years.

Collaboration can be the key to discovery. In the case of a dynamic partnership between a University of Regina research team and an industry partner, it’s also the key to an award that celebrates innovation.