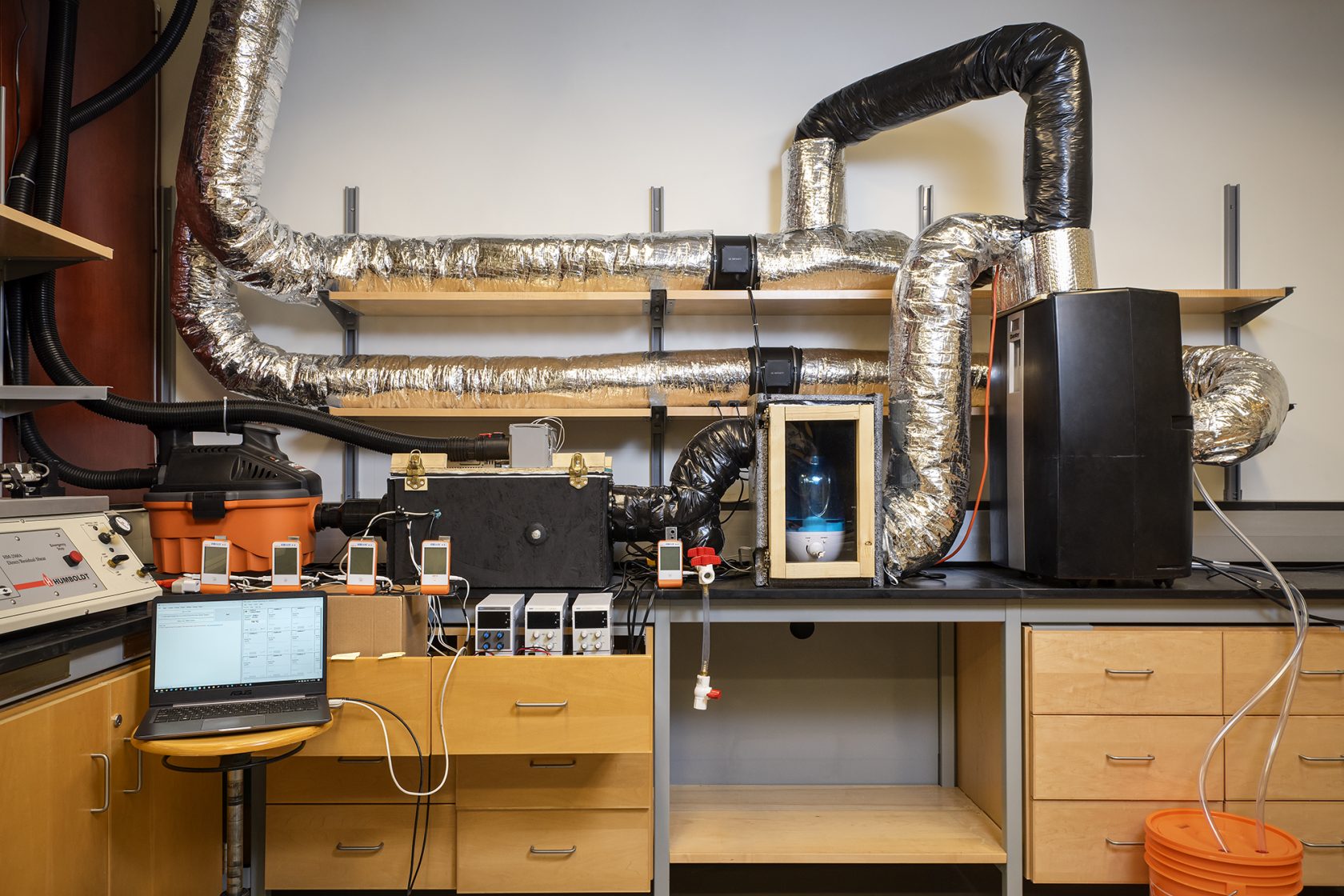 Climate in a box

The Bench-Scale Atmospheric Simulator is a climate in a box created by PhD student Jared Suchan. (Photo by Trevor Hopkin)

In its final crop report of 2020, the Government of Saskatchewan declared that moisture conditions throughout the province remained a concern. Much of the province, the report read, received minimal or below average rainfall along with hot temperatures and drying winds throughout the growing season. Parts of the southern and central regions reported short or very short topsoil moisture conditions for most of the year. This came on the heels of the 2019 growing season that was equally plagued by lack of moisture.

In Saskatchewan, with its semi-arid climate, developing a better understanding of how water evaporates from soils and lakes could have huge implications for farming, municipal infrastructure, and water management.

For Jared Suchan, a doctoral candidate in environmental systems engineering at the University of Regina, the importance of the right amount of precipitation at the right time was a lesson he learned on trips to his grandfather’s farm near North Battleford. 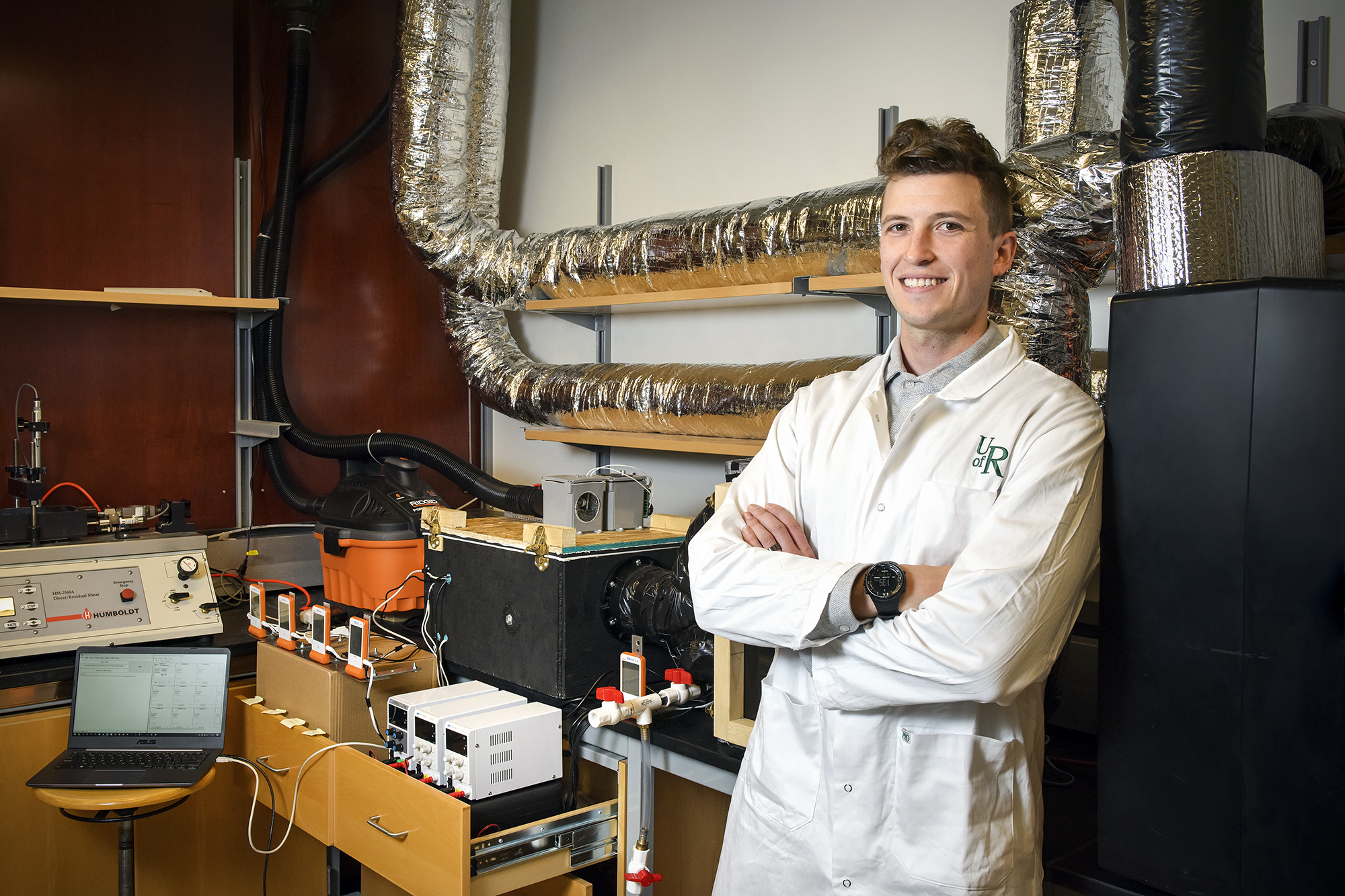 Jared Suchan, a doctoral candidate in environmental systems engineering, has developed a climate in a box which he calls the Bench-Scale Atmospheric Simulator. (Photo by Trevor Hopkin)

“In our family’s visits to the farm and conversations with my grandpa, I learned that timely rains were always on his mind during the spring and summer,” says Suchan. “It became very apparent to me that moisture was a critical component to the success of the farm.”

As part of his PhD program, Suchan has developed a way to study the effects of evaporation by bringing weather into the lab. His Bench-Scale Atmospheric Simulator (BAS for short) is essentially climate in a box. It not only simulates the four factors that drive evaporation – wind, temperature, humidity, and sunshine ­– but can also manipulate each factor individually while holding the others constant.

“In discussions with my grandpa, I’ve come to understand that the farming business is a very competitive one with very tight profit margins. If a farmer can save five to ten per cent on an expense in their operations, the profit goes straight to their bottom line in being a sustainable and productive farming operation.”

Suchan admits that while there can be occasional excesses of moisture, the long-standing challenge for Saskatchewan farmers and ranchers has generally been managing and optimizing available moisture under dry conditions. This is particularly important in the southwest part of the province and in areas where there is irrigation and the potential for irrigation.

The ability to run various climate simulations in the unit could also help farmers determine what crops to plant under which conditions.

“This may not be the silver bullet in terms of answering all their questions, but it could be one of the little pieces that helps inform things,” says Suchan.

While he admits he’s not an expert in climate change, Suchan speculates that the biggest concern for agricultural producers in the future will be in regards to water availability. 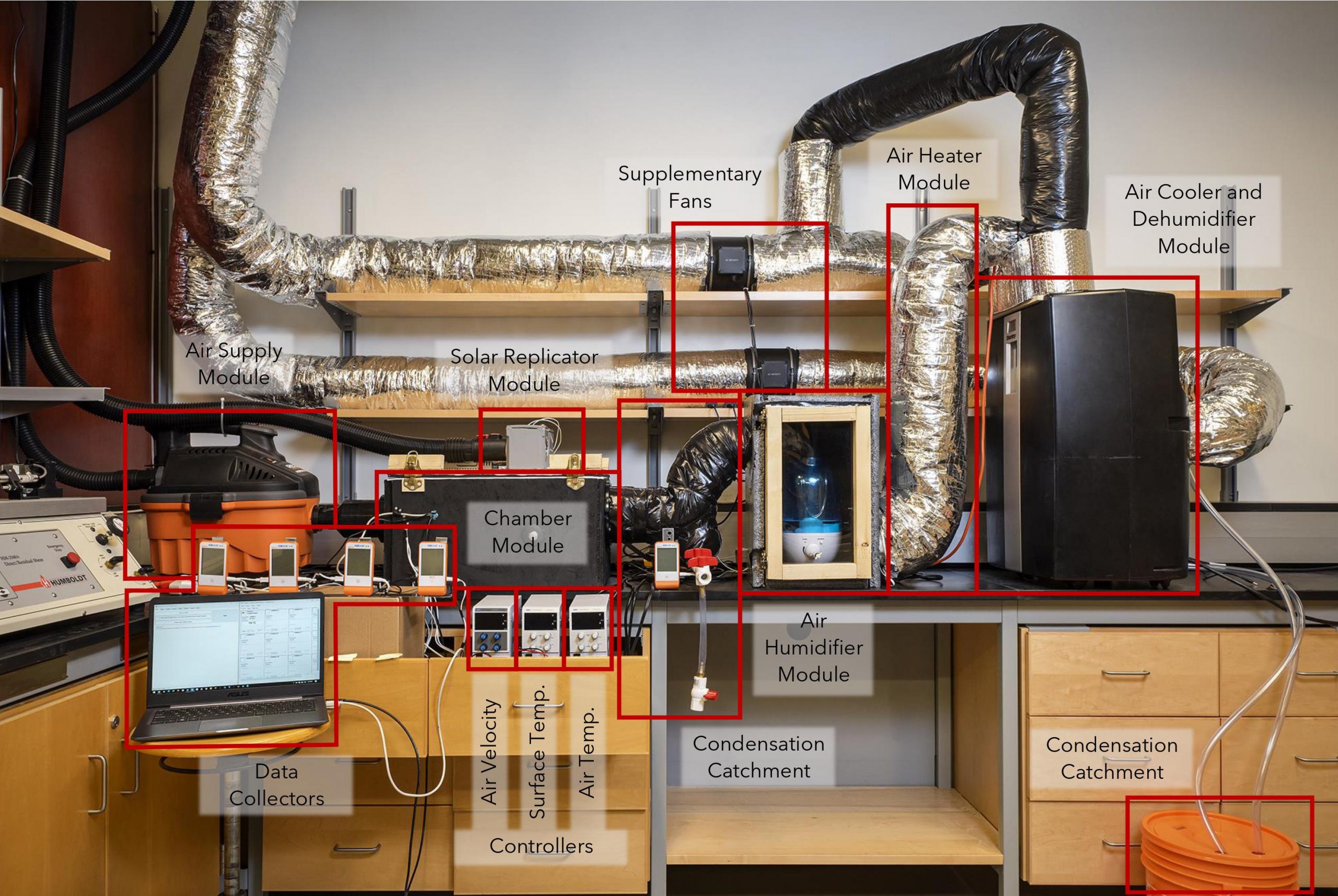 The BAS labelled by Jared Suchan.

Shahid Azam, Suchan’s PhD supervisor, says that in Southern Saskatchewan the top three applications for this technology will be the ability to predict soil moisture in agriculture, to find better ways to deal with the effects of Regina’s gumbo clay on city infrastructure, and the potential to manage water bodies.

Suchan is currently validating the performance of the device by comparing its predictions for evaporation from Lake Diefenbaker to those generated with widely used mathematical formulas – some of which were originally developed back in the early 1900s. Preliminary results look promising.

Once he’s confirmed the unit’s ability to accurately predict the impact of climate factors on evaporation from local bodies of water, Suchan will shift his attention to studying the more complex questions of evaporation from water containing high concentrations of salt (brine) and evaporation from different types of soils. The research is supported by a Discovery Grant from the Natural Sciences and Engineering Research Council of Canada (NSERC).

“This may not be the silver bullet in terms of answering all the questions, but it could be one of the little pieces that helps inform things,” says Suchan. “It will be great if we can predict that with more salt in your soil, or with a warmer climate, or with a drier climate, these are the effects we anticipate occurring with water coming and going from the soil.”

This story was modified from its original version on February 1, 2021.

Exploring the lived experiences of mothers living with schizophrenia.

U of R researchers argue that COVID-19 offers an opportunity to rethink healthcare in the Canadian correctional system.