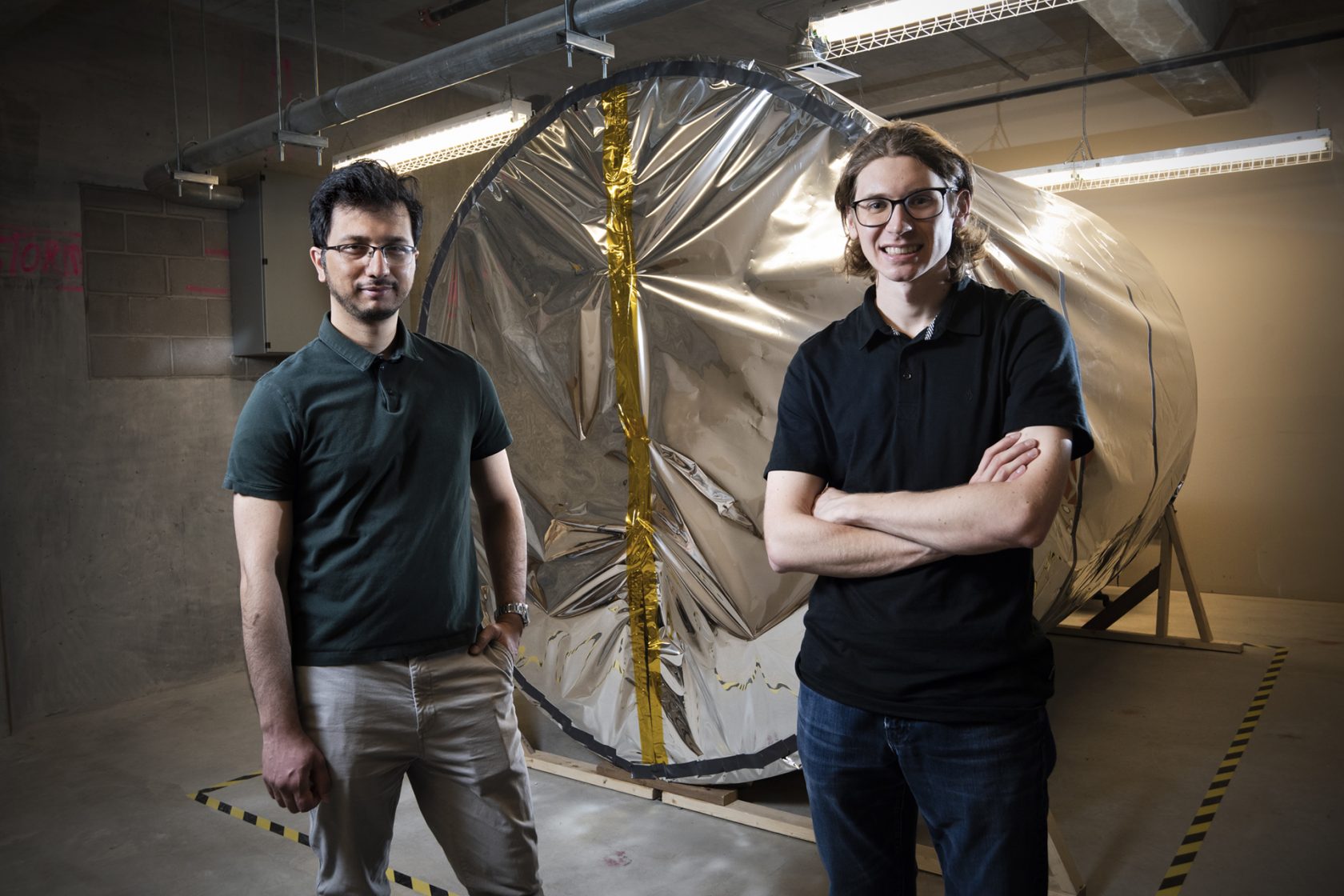 Anwit Adhikari and Wil Norton in front of a mock-up of the airlock. (Photo by Trevor Hopkin)

Wil Norton can’t recall a specific moment when he and the team of U of R engineering students he was leading went from trying to win an intercollegiate competition to believing they could launch a key design component of future space travel.

It was more of a gradual shift, he recalls, that began in summer 2019, shortly after the squad had captured top honours in the first stage of the Project Airlock Challenge, an international contest hosted by engineering students at the University of British Columbia (UBC).

In 2018, teams of engineering students from around the world were invited to design and build a working prototype of an airlock suitable for an early mission to Mars. An airlock is a chamber with doors on either end, attached to a habitat where astronauts live and work. It equalizes the pressure differential between the external environment and the inside living space. 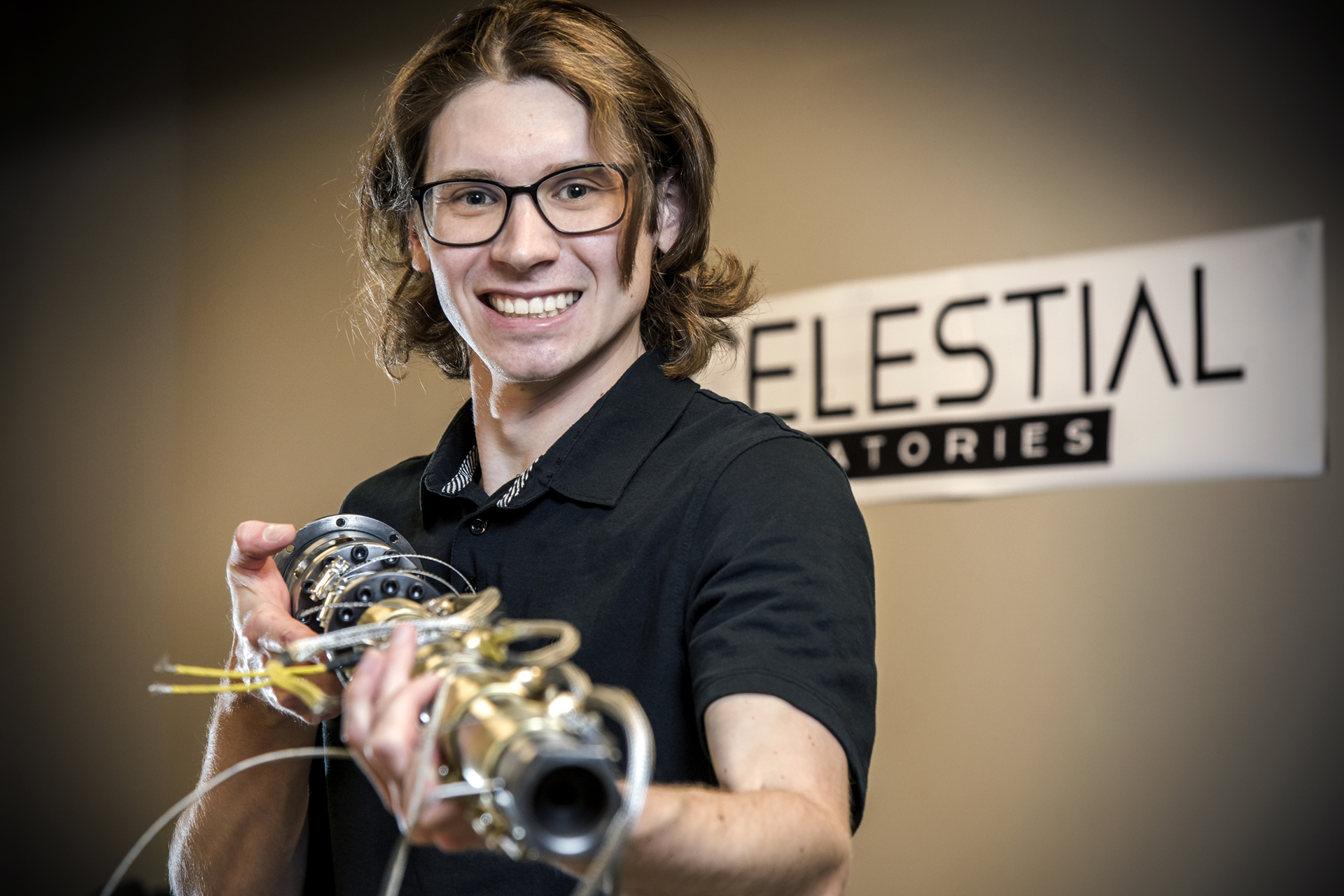 Norton, a fifth-year student in electronic systems engineering who has been part of the project since the outset, says both the competition judges and people working in the space industry told his team they were on to something. “At that point we were like, okay, we shouldn't just think of this within the confines of a student competition or a game,” says Norton. “If they're treating this stuff as if it has potential, we should figure out which parts of the work we're doing could actually help advance the space industry and science.”

Norton and the team carried on building the prototype that would ultimately win the final stage of the UBC competition in a head-to-head virtual showdown with engineering powerhouse University of Waterloo in August 2021. But, by then, the competition had become secondary. The team’s focus had turned to the specific components they thought would most likely be useful to industry. “From that point forward, a lot of our energy went into designing them to be as manufacturable and as useful as we could.”

Students’ airlock prototypes had to pack down to a size small enough to fit inside a spacecraft travelling to Mars, and be sophisticated enough to deal with the harsh realities of the red planet—an absence of air pressure, no breathable atmosphere, and temperatures that average -62 degrees Celsius.

“It was a Hail Mary. We weren’t afraid to try some things that were unorthodox to try to get an edge.”

Of the four designs submitted by engineering programs, the one put forward by the U of R team was judged to be the most innovative. The group took a calculated risk, Norton says, with a design that represented a departure from both current standards in the space industry and from what their competitors were doing.

One of the biggest differences was that they used a plastic, polyetherimide, for many of their core components rather than aluminum. This was cheaper, because they could manufacture the pieces themselves using a 3D printer rather than hiring a machinist. The resulting components were both lighter and stronger.

“Our rationale was that if we do something that’s ‘out there’—worst-case scenario, we just lose the competition,” says Norton. “It was a Hail Mary. We weren’t afraid to try some things that were unorthodox to try to get an edge.”

With U of R workshop space at a premium, the team ended up developing their prototype in the basement of a building at Regina’s tech hotspot, Innovation Place. Team member Megan Turluk secured the lease in her role as director of acquisitions and distributions—a position that she says taught her a host of new skills, from sourcing materials (a major challenge with pandemic-induced supply chain disruptions) to financial management, trade agreements, woodworking, and even some web design.

“The most rewarding thing for me was the opportunity to engage in disciplines I previously had not been exposed to,” says Turluk, who is still working with the team, despite having transferred to UBC.

While his official title was team lead, Norton says his role was whatever it needed to be to keep things moving forward. He recruited and trained new team members—the latter responsibility often requiring him to first learn the material himself. He pitched in on much of the structural design. And he designed many of the manufacturing processes used by the team.

Anwit Adhikari, who led on a couple of the project’s main technical challenges, says designing and prototyping an airlock has lots of moving pieces. Given the project’s complex nature—four separate task teams each focused on a specific element—it was important the team have a leader able to keep multiple balls in the air at all times. 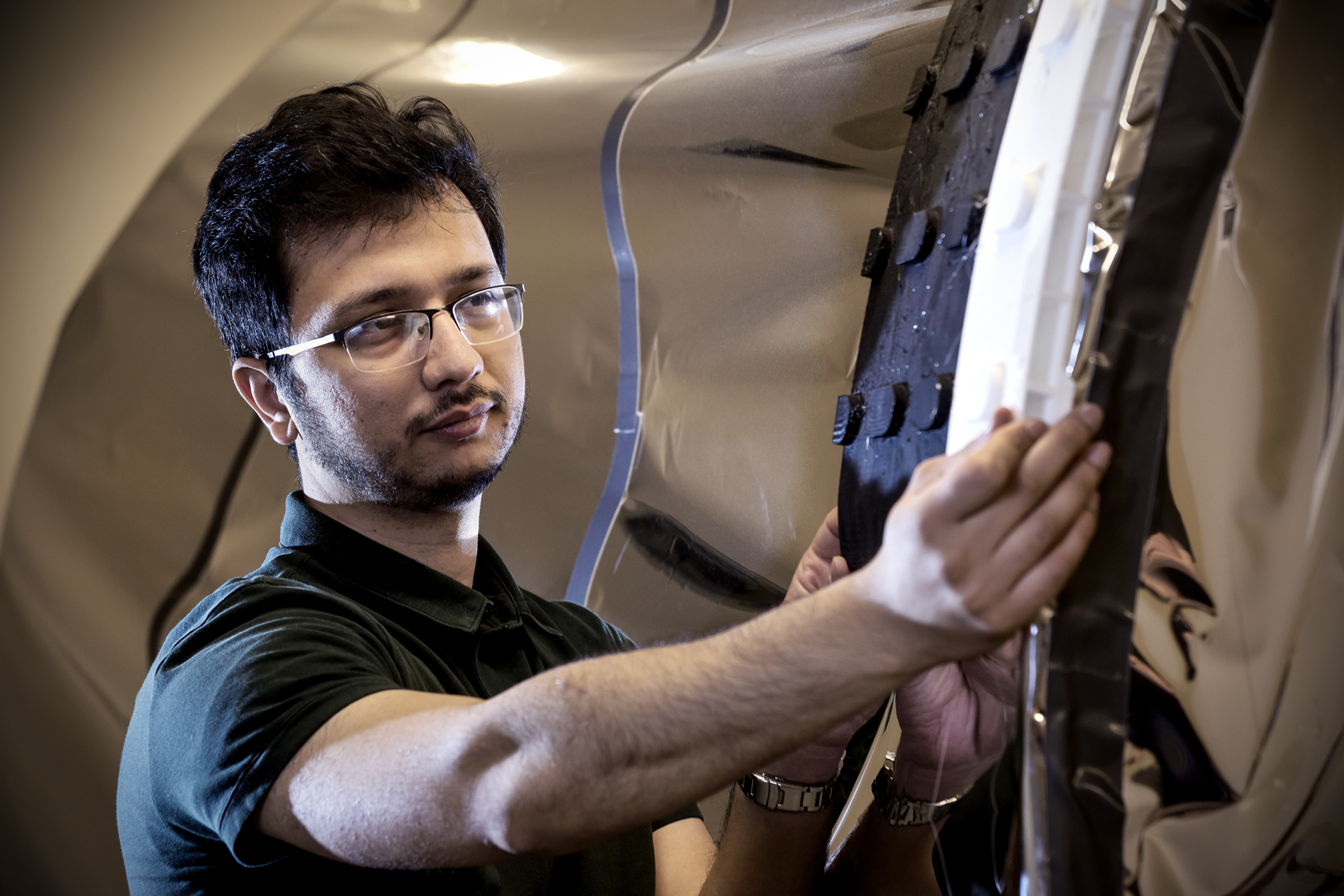 Anwit Adhikari fitting an endoskeleton he designed using a 3D printer onto the mock-up airlock. (Photo by Trevor Hopkin)

“Wil is quite efficient,” says Adhikari, who completed his Bachelor of Science in Physics in 2020. “We needed someone like that at the top.”

The UBC competition is officially over, but Norton is part of what he calls a “core group of five generalists” who continue to fine-tune the air management system and some structural components of their design in response to encouragement from companies working in the aerospace industry. He’d like to see one of the major space governing bodies—either NASA or the Canadian Space Agency— buy the patent for some part of their model, or work with members of the remaining team to develop the technology.

“Where we are currently, I don’t think that’s infeasible,” says Norton. “We’re certainly moving forward with the thought that it’s a very real possibility.

“The further we get along with this work, the more signs we’re getting that people are genuinely interested in what we’re doing.”

U of R postdoc’s research on a novel gene moves us closer to better treatment, possible cure for Parkinson’s.

U of R and partners receive $1.27 million in research funding for a Northern Saskatchewan virtual health-care pilot project.